Should I get a DaTscan or PET scan to confirm my diagnosis of Parkinson’s disease?

You can find out more about NPF’s National Medical Director, Dr. Michael S. Okun, by also visiting the NPF Center of Excellence, University of Florida Center for Movement Disorders & Neurorestoration.

This past month, the FDA approved DaTscan (Ioflupane I 123 injection, also known as phenyltropane), a radiopharmaceutical agent which is injected into a patient’s veins in a procedure referred to as SPECT imaging. DaTscan is an important addition because it is anticipated to be more widely available than other techniques and it has received several major endorsements from leading scientists.

One of the most frequently asked questions about Parkinson’s disease on NPF’s “Ask the Doctor” web-based forum is whether or not to pursue DaT or PET scanning to confirm a diagnosis of Parkinson’s disease.  In this month’s What’s Hot column, we offer a review of the subject in light of the recent FDA approval.

If you have already received a diagnosis from an expert, and are responding well to dopaminergic therapy, in most cases of Parkinson’s disease, PET and SPECT scans would not add any new information and therefore likely to be unnecessary. In cases where the expert is not sure of the diagnosis – is it essential tremor or Parkinson’s, for example– or where a potentially risky procedure is being considered (e.g. deep brain stimulation surgery), it is reasonable for your doctor to recommend a PETscan or DaTscan.  It is important to keep in mind that PET and SPECT scans should be performed only by experienced neurologists who have executed a large volume of Parkinson’s disease scans, because experience is important in accurately reading these imaging results.

Here is how it works:    First, the person receives an injection of the imaging agent. After injection, the compound can be visualized by a special detector called a gamma camera.  This so-called scan measures something called the dopamine transporter (DaT), and it can help a doctor determine if patients are suffering from essential tremor, vs.  Parkinson’s disease or another parkinsonism (i.e., other problems affecting dopaminesystems that have symptoms of Parkinson’s disease). . The side effects are minimal (e.g. headache, dizziness, increased appetite and creepy crawly feeling under the skin). PET scans and DaT/SPECT scans examine the “function” of the brain rather than its anatomy. This is an important point because unlike in strokes and tumors, the brain anatomy of a Parkinson’s disease patient is largely normal. These scans can show changes in brain chemistry, such as a decrease in dopamine, which identify Parkinson’s disease and other kinds of parkinsonism. There are several compounds available for use in both PET and SPECT scanning; however PET scans typically focus on glucose (sugar) metabolism, and DaT/SPECT scans focus on the activity of the dopamine transporter.

The new DaT scans use a substance that “tags” a part of a neuron in the brain where dopamine attaches to it, showing the density of healthy dopamine neurons.  Thus, the more of the picture that “lights up”, the more surviving brain cells. If the parts of the brain where dopamine cells should be remain dark in the scan, an expert reader may diagnose early brain degeneration.  This could mean either Parkinson’s disease or parkinsonism.

In Parkinson’s disease, people will lose cells in a part of the brain associated with movement referred to as the basal ganglia.  There is a common pattern seen in people with Parkinson’s, with the cell loss starting on just one side, towards the back of the basal ganglia, and deep down.  Over time, the affected area spreads across the basal ganglia.  However, as part of the normal aging process, it is completely normal to lose some of these cells—therefore it takes an expert to read these scans and figure out if the changes are due to normal aging or due to disease.  There are typical scan patterns that may emerge. The more widespread the decrease in uptake on the scan, the more advanced the degeneration.

Interpretations can, however, be tricky.  The first determination is whether the scan is normal or abnormal.  Next, the expert will determine if the scan follows the pattern of Parkinson’s disease.  Finally, a determination will be made as to the severity of the brain cell loss.  There are only a few centers that regularly perform very high quality PET scans for Parkinson’s disease, and these centers usually have experts in interpretation.  Two centers with leading reputations include Long Island Jewish Hospital in New York (North Shore) and Washington University Hospital in St. Louis, although there are others.

PET scans are FDA-approved for the diagnosis of dementia, but not for the diagnosis of Parkinson’s disease. However, if you or your relative has cognitive impairment, the scan can be ordered to examine for the presence of Alzheimer’s changes as Parkinson’s disease often co-occurs with Alzheimer’s. The cost can range from $2,500-5,000.  Many expert centers perform PET scans for free under research protocols.

Recently, in studies that have attempted to diagnose Parkinson’s early in its course, researchers have found that a subset of patients thought to have Parkinson’s disease have turned up with negative PET or SPECT scans.  These patients do not seem to develop the progressive symptoms of Parkinson’s disease.  These findings are humbling, and they lend credence to the importance of following patients over long periods of time to ensure both accurate diagnosis, and also appropriate treatment.

An example DaTscan is shown below and it demonstrates essential tremor on the left (normal DaT), and a parkinsonian syndrome on the right (decreased DaT). 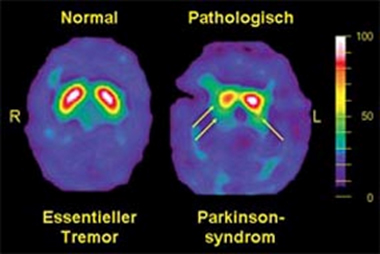 An example of a PET scan is below and it reveals: in the top panel a normal scan, in the middle panel abnormalities in the putamen (red uptake in the figure) in a patient with Parkinson’s disease, and in the lower panel a return to an almost normal scan following the introduction of levodopa. 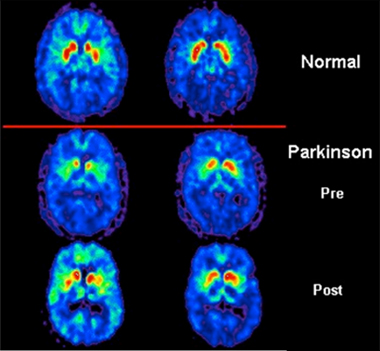 In conclusion, in cases where the diagnosis is uncertain (e.g. Parkinson’s disease versus essential tremor), a DaT or PET scan can be very useful.   But patients and their families need to be aware that in general, these scans cannot reliably separate Parkinson’s disease from parkinsonism (multiple system atrophy, corticobasal degeneration, progressive supranuclear palsy), and thus if you seek a scan you will still need an expert to sort out your clinical picture and diagnosis. If you have already been diagnosed, if your symptoms are progressing, and you have an adequate response to medications, most likely a PET or DaTscan would add little new information and therefore not be necessary.

Professor of Neurology, expert on Parkinson's disease and other basal ganglia disorders, deep brain stimulation, author of over 300 research papers and the bestselling book…

Read all articles by Michael Okun