Ten Questions I Need to Ask About DBS

DBS is a relatively new procedure that utilizes an implantable electrode, which may be used in place of, or in conjunction with, ablative brain procedures such as pallidotomy or thalamotomy.  Patients with PD, tremor, dystonia, or OCD with or without Tourette who are medically refractory to therapy, and who have no cognitive difficulties or “minimal” cognitive dysfunction may be appropriate candidates.  The definition of “minimal” cognitive dysfunction may vary from center to center and will be discussed in this paper.

The procedure is FDA approved and the deviceis manufactured by the Medtronic corporation.  It has four electrode contacts (quadrapolar), and depending on the disorder and/or the target one may use variably sized contacts with different spacing arrangements.  Each contact can be activated utilizing monopolar or bipolar stimulation, and multiple settings can be adjusted for individual patient needs.  These settings including the pulse width, frequency, and amplitude of stimulation.  The DBS electrode is implanted into a specific target within the brain, and is attached to a programmable pulse generator.  The pulse generator, or neurostimulator, is implanted in a subcutaneous pocket below the clavicle and connected to the DBS electrode in the brain via a tunneled extension cable that passes subcutaneously over the clavicle, and across the posterior aspect of the neck and skull.

Careful patient selection is the most important step when considering DBS surgery.  There are no standardized criteria for choosing candidates, and criteria may be different depending on the targeted symptom or disorder.  We will discuss the important aspects of patient selection that need to be considered in Parkinson Disease, essential tremor, dystonia, and OCD with or without Tourette. 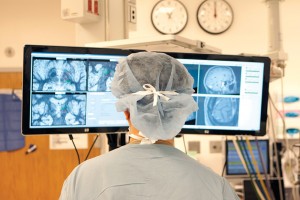 PD, which is a slowly progressive neurodegenerative disorder (cardinal manifestations- resting tremor, bradykinesia, rigidity, gait disorder), presents many challenges for the practitioner who is considering offering DBS to an individual patient.  Although there are no set criteria, recently a screening questionnaire has been validated
for this purpose. The Florida Surgical Questionnaire for PD or FLASQ-PD (Okun et al., 2004)  is a 5-section questionnaire that includes:

Potential candidates who score well on this questionnaire still should have medical optimization with a movement disorders specialist (if possible), a neurosurgery consultation, an MRI, and a full neuropsychological evaluation.  Some patients may additionally require a speech and swallowing evaluation, and psychiatric evaluation for treatment of active affective disorders.

In general the best PD surgical candidates have idiopathic PD (not parkinsonism, like PSP, MSA, LBD, or CBGD), tend to be younger (below age 69, but may be older), have a significant response to medication (at least 30% but preferably higher), medication refractory symptoms (wearing off, on-off fluctuations, dyskinesias, etc.), and no or little cognitive dysfunction.  The most controversial aspect of patient selection often involves defining unacceptable cognitive dysfunction especially since many PD patients suffer from frontal and memory deficits, but are quite functional in their daily lives.

In ET, patients suffer from postural and action tremor which often disrupts the simple but important daily tasks such as handwriting or drinking.  Candidates for DBS with ET are more straightforward than PD candidates.  They must have medication refractory ET defined as having failed maximal titrations and preferably combinations of a beta blocker, primidone, and possibly a benzodiazepine.  The tremor must be interfering with their quality of life.  There are no questionnaires to screen for good ET surgical candidates,however the same interdisciplinary workup is necessary (as was discussed in PD).  Again, the most difficult criteria to interpret for the ET candidate is the neuropsychological screening data, especially since the recent recognition that ET can be associated with significant frontal lobe dysfunction.  Specifically ET patients with thalamic DBS have shown deficits in attention, verbal fluency, immediate word list recall, semantic encoding, and facial matching.

Other disorders which may be addressed by DBS have been less studied in terms of selection criteria.  In general the best surgical candidates who have dystonia (a twisting disease where agonist and antagonist muscles co-contract and leave the sufferer in abnormal postures which may be worsened by action) suffer from generalized dystonia which may or may not be the result of an identified genetic defect at the DYT-1 locus (Oppenheim’s dystonia or torsion dystonia).  This criteria is a generality, as more reports of DBS for focal dystonia emerge.  Secondary dystonia, or dystonia due to other causes such as trauma or metabolic disorders seem to be less responsive to DBS, although the best surgical target remains to be defined for these cases.  The dystonic patients should have failed maximal doses and preferably combinations of medications including anticholinergics, muscle relaxants, and benzodiazepines, and should also undergo the same workup as described above for PD patients.  It is helpful in dystonia if the operation is performed before abnormal joint postures become fixed or contracted.  Patients
with generalized dystonia may test normal on a neuropsychological battery although recently it has been shown that they may suffer from impairments in complex learning, and also other cognitive deficits.  It remains unknown whether the neuropsychological profile in dystonia patients effects outcome.

DBS for OCD or Tourette with or without OCD remain investigational at this time.  All potential candidates should be refractory to standard medical therapies, and informed consent should be obtained from an institutional review board before offering the procedure.  The profile of the best candidates with these and similar syndromes remains unknown, although all candidates should undergo the same vigorous testing recommended above for PD patients.

Question # 1 – What is Deep Brain Stimulation?