“After more than 30 years of running, the Boston Marathon continues to be one of the most special places and events I have ever run. The history of the race and the city, the infamous course including “Heartbreak Hill,” the incredible crowd participation, and the crowds of runners from all over the world combine to make this a very unique and hallowed event. It is a chance to chase the mythical unicorn, symbol of the Boston Athletic Association.”

The 2013 Boston Marathon has forever changed the face of the marathon. The world watched as two individuals committed “senseless acts of violence” that lead to 4 deaths and 284 injuries.

“Life’s battles continue unabated.  In our personal lives as well as for humankind overall, one day it seems we have made so much progress in ourselves and our world, only to see it all fall apart the next day. We saw it demonstrated last year on April 15th when the bombs killed 4 and injured many more, stopping the race.”

“An attack on something as beloved as the Boston Marathon ripped at Boston’s heart and at the hearts of runners everywhere.  And yet, within moments of the bombings people were putting their lives on the line to help each other. “

I [Meredith] finished the 2013 race in a little over 3 hours and 17 minutes, being fortunate enough to escape the bombings. I felt a sense of relief to be alive and well, but guilty for being so helpless sitting in a safe apartment in Cambridge watching the madness unfold on TV. We spent the rest of the day ensuring all of our Gainesville runners and my brother who attends Berklee College of Music were safe. In a daze, my mother and I were able to make it back to Florida later the next day. A week later of attempting to return back to “normal life”, I found out I was pregnant. The baby was due late December 2013.

“The smoke in 2013 from the charred buildings on Boylston Street had barely cleared the air when the phrase “Boston Strong” became a mantra.  The powerful images of runners returning to Boston begin with a woman sitting on the finish line with her prosthetic legs beside her and the words “still standing” written on the remaining portions of her legs.” 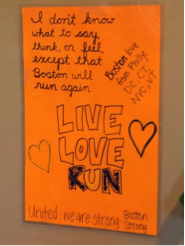 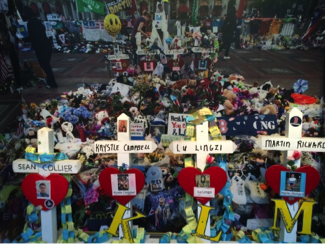 David, I, and about 36,000 other runners decided the best way of “demonstrating the capacity of the human spirit to survive adversity” was to return to Boston this year. David qualified at the Vermont City marathon and I was able to use my “pre-baby” race from the Gainesville Five Points of Life marathon of 2013. Thankfully baby Desmond arrived 10 days early, giving me exactly 4 months to get the post-partum body to the starting line. I am also terribly blessed to have an incredible support team of family members, friends, and co-workers that played with the baby while I snuck in a few miles and didn’t deem me completely insane for running a marathon so soon after having a baby.

All of the runners and supporters had different reasons for returning to Boston. For David:

“Still standing, Boston Strong. What a powerful reminder that chasing the unicorn is such an important part of life and not just in Boston.  I am thankful that a tradition that began in 1897 and has continued every year since (except for 1918) is still scheduled to go on this year and I have a chance to be part of it.”

For me, I had numerous emotions drawing me back to Hopkinton. I wanted to show that two idiots would not destroy a sport in which people are free to “run happy” and that I would not fear what we cannot control or plan for. I wanted to give back to the city of Boston and to whatever higher being there might be in the sky that spared me and my son from harm in 2013. Lastly, it’s important for me to lead by example. All day long I preach the importance of exercise and increased amounts of activity to our patients. I was lucky to have an uncomplicated pregnancy and labor, therefore I was able to take my place in wave 1, corral 7 on marathon Monday.

“On the bus ride which is approximately 45 minutes long, I start to gather my thoughts.  My goal was to run as many miles at 8 minutes or slightly faster as possible, and 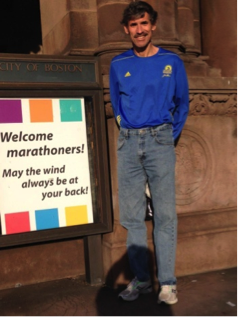 finish under 3:30.  Boston is not kind to those not well trained. I know I am undertrained for this race, too few miles and too few long runs.     Runners everywhere are heard saying “the main this is just to be part of this. It doesn’t matter what I run.”  I whisper those same words, but somehow I know I don’t mean them.

The sendoff in Hopkinton was the first sign of what a special day this was going to be.  The first of a crowd of more than 1,000,000 spectators let us know they were glad we were there.  And it was loud.  The early miles clipped off relatively easily and I held back to avoid running too fast as the course falls downhill at a very steady rate. I checked in at the half in 1:42:30 seconds.  Near perfect pacing, I thought.

Past Wellesley though, the Hills of Newton, including Heartbreak Hill wait.  They are not one punch knock outs from a heavy weight, but skilled fighters jabbing and body banging, slowly draining the life out of runners.  Here is where a lack of training becomes a major problem.  I pushed on thinking 8:00 minutes.  An unexpected downhill mile allows me to stay on pace.  Somehow I block a few blows and push through the ones I cannot block and reach the bottom of Heartbreak Hill, the biggest of the group and also the last.  My pace slows to a crawl and I suffer though the most painful mile yet.  But I know if I can get to the top, the rest is downhill.  As I crest Heartbreak, I am still below 8:00 pace, but my chin was bleeding and my eye was closing shut.   I lengthened my stride and began “pushing” on the downhill.  That is when a two by four whacked me across the forehead”.

My slowest miles followed including two at a 9 minute pace.  Twice I found myself walking.  Was this where my lack of training would do me in?  Was it where Parky would get to sit in the front seat and drive?  It is definitely where some of the largest and loudest crowds push you on.  Boston College, Coolidge Corner, Kenmore Square and the Citgo sign marking one mile to go both disorient you with their intensity and remind you why you are at Boston.  The turn onto Hereford Street sets up the most spectacular finish I have ever been part of.  It is one block to Boylston and the last 600 meters or so of the race.  Boylston Street is deafening as thousand jam behind the barriers.

I crossed in 3:29:02, my slowest Boston ever.  And yet, one of my best ever.  On this day, that finish line belonged yet again to us – the finishers of the Boston Marathon.”

In less than 3 and a half hours, David and I both crossed the finish line of a spectacular marathon. One could not have paid for better weather. The organization, safety, and amenities were impeccably executed by the BAA and countless volunteers. I was afraid that my body might not hold up the first half of the race. But the crowd of more than 30 people deep spread throughout the entire 26.2 miles carried me the entire race. I ran happy, not once feeling afraid. I felt inspired by the spirit of all those around me, especially by those battling the hills on their prosthetic limbs. It was clear that no matter what each of us may be battling such as: post-partum weakness, Parkinson’s disease, or learning to run on a new limb, the finish line would reel us in to Boston. 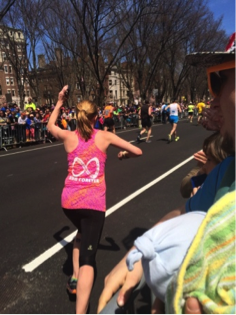 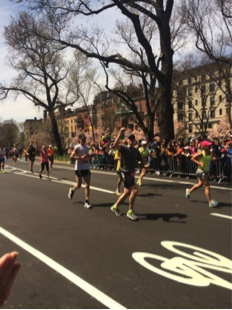 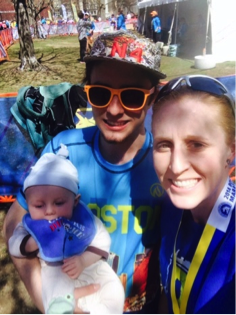 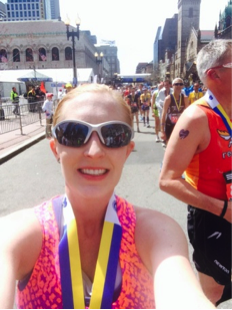 I found my brother, mom, baby, and dear friend Allison around mile 25.5 and was able to kiss the sleeping baby (no clue how he slept through all the screaming and cowbells) as I passed by on the way to the finish line. I fist pumped my way down the final stretch and crossed the finish line in 3 hours 25 minutes. As with David, not my fastest, but definitely the most meaningful finish to date and enough to hopefully take me back in 2015.