It’s true. There often is a wall between the neurosurgeon and the neurologist involved in deep brain stimulation (DBS) procedures.

But for the past 12 years and 1000 DBS lead implantations over that time, there has been no wall between Dr. Kelly Foote & Dr. Michael Okun, co-directors of the UF Health Center for Movement Disorders & Neurorestoration. Their story, the story of our Center’s history, the story of deep brain stimulation’s history, and the story of one of our patient’s surgeries, are profiled in a new article in Smithsonian Magazine. The mental image of blowing that wall “to smithereens” that author David Noonan brings up seems appropriate.

The article has plenty of little stories like this one:

In the 12 years since they joined forces, Okun and Foote have seen DBS evolve, in Okun’s words, “from crazy, to kind of cool but not completely accepted, to accepted.” Okun, 42, recalls: “When I first got hired here, my chief said to me, ‘You’re a nice kid, you’re a polite kid, but don’t embarrass us.’”

That journey from “crazy” to “accepted” is but a part of our story. It also includes:

Basically everyone that visits our operating room is amazed when they see the patient is awake and very much involved in the procedure, and with the bizarre static-like sounds coming from a laptop and speakers near the patient. Those are the sounds of neurons, their electrical signals “heard” by a very thin micro-electrode, amplified, and broadcast into the room.

As the probe moves deeper into the brain, the sound of the cells fills the OR, like static from deep space.

With his trained ear, Okun distinguishes between normal neurons and the abnormal neurons that are causing Haning’s tremor, and he guides Foote to their target, a malfunctioning network of cells located in Haning’s thalamus, near the center of his brain, about four inches down from the hole in the top of his head. “That’s a tremor cell,” he says at one point. “Can you hear it?”

These sounds allow Foote & Okun to refine the placement of the actual deep brain stimulation electrode that will go in later.

“Location is everything,” says Okun. “A couple of millimeters in the brain is like the difference between Florida and California.”

The Smithsonian article has much more information and some wonderful photos taken by Bob Croslin. Please check it out on the web (or by finding the magazine cover below in your physical or digital newsstand of choice) and see the below links if you 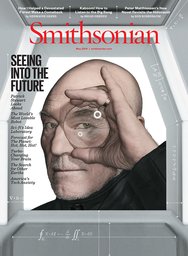 want more information about DBS at our UF Health center.

Read all articles by Charles Jacobson