Researchers at the University of Florida’s Departments of Neurosurgery, Neurology and the Stereotactic Radiosurgery and Biology Lab have developed a three-dimensional atlas of the brain structures targeted in movement disorders surgeries (published in the journal NeuroImage). Basal ganglia structures such as subthalamic nucleus(STN), globus pallidus interna (GPi), and ventralis intermedius nucleus (Vim) are primary targets for deep brain stimulation surgeries and lesion surgeries.

The atlas was developed by digitizing the Schaltenbrand-Bailey atlas and using a series of algorithms and the experience of researchers to turn the few sagittal and coronal slices into full 3D visualizations of the basal ganglia structures. This allows neurosurgeons and researchers to look at these structures from any angle, not just those provided in the original atlas slices. 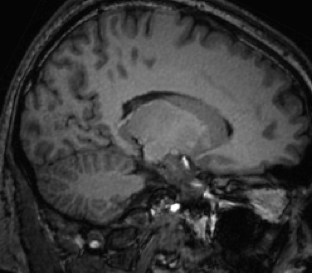 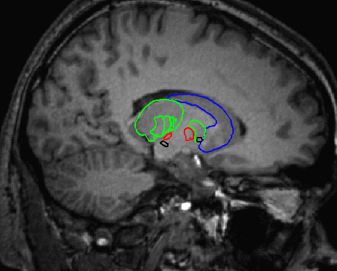 Below is a para-sagittal view of the atlas superimposed over the MRI of a patient. The slice is shown at a more than 20 degree angle from the sagittal axis (so the atlas looks somewhat different than what neurosurgeons are used to). This patient had a previous DBS implantation that just misses the top of the STN (red structure). The dots represent two of the microelectrode recording tracks that were recorded during the patient’s DBS surgery at Shands. The red dots represent when the UF neurologist heard STN sounds while the dots with Qs beside them represent when the neurologist heard “quiet”. The thicker dots are squares, triangles or other symbols that represent when the neurologist heard neurons firing when the patient’s hand, arm or leg are moved. These two tracks, along with possibly other tracks, helped the surgery team decide where to implant the final electrode to get the best results possible. 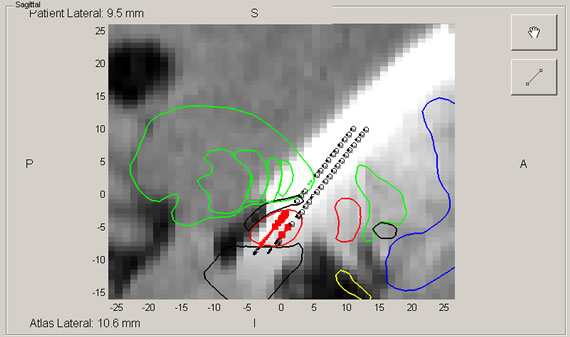 The screenshot below shows a para-coronal slice. Again, two tracks that were parallel in this plane are shown. Several thalamic and GPe cells were seen and are marked in green. Both tracks had several cells at the top of STN responded to passive movement of the patient’s body parts. This atlas has been implemented along with the FGATIR MRI scan in a new piece of software used in our operating room to further increase the accuracy of our targeting for Deep Brain Stimulation surgery.