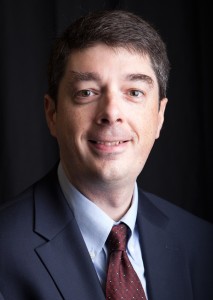 Dr. McFarland holds The Wright/Falls/Simmons Professorship in PSP/Atypical Parkinson’s. Nikolaus McFarland, M.D., Ph.D. joined the UF Department of Neurology (and Neuroscience) and the Center for Movement Disorders and Neurorestoration as an Assistant Professor. He is also a member of the newly formed Center for Translational Research in Neurodegenerative Disease (CTRND) which aims to bring the bench closer to the bedside.  He is a fellowship trained movement disorders neurologist.

He graduated from the University of Chicago in 1992 with honors in Biology and election into the Sigma Xi research society. He completed medical and graduate training in the MD/PhD program at the University of Rochester School of Medicine & Dentistry, where he received a merit award for outstanding graduate research in thalamic and basal ganglia anatomy. Afterwards he went to the University of Virginia for internship and residency training in neurology, and then to the Massachusetts General Hospital to pursue fellowship training in Movement Disorders and research in Parkinson disease and related disorders at the MassGeneral Institute for Neurodegenerative Disease (MIND). As a Udall Fellow he became the first recipient of the Robert Koch Parkinson Disease research fellowship, and was awarded foundation support from both the American Parkinson Disease Association and Michael J. Fox Foundation for his research. He is now also NIH funded.

His research has focused on understanding the pathological mechanisms of Parkinson disease and related disorders, and in particular the role of alpha-synuclein in cell toxicity and neurodegeneration. His current studies utilize both cellular and preclinical models to study genes and molecules that may enhance or ameliorate alpha-synuclein toxicity. A primary goal of his research is to identify and to develop potential novel therapeutics for Parkinson’s disease and related disorders.

In addition, Dr. McFarland has strong clinical interests in Parkinson disease and Atypical Parkinsonisms (Parkinson-plus syndromes), including progressive supranuclear palsy (PSP), multiple system atrophy, dementia with Lewy bodies, and corticobasal degeneration. He is spearheading, along with Dr. Chris Hass in Exercise Physiology, the development of an exciting multidisciplinary clinical-research program for PSP and atypical Parkinson’s disease through the support of the Allens and several other afflicted families.